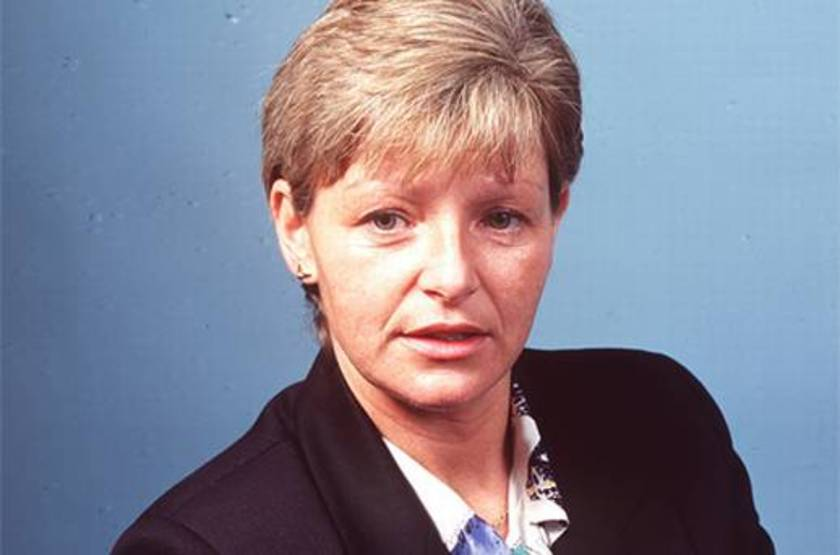 Veronica Guerin (1958 –1996) was an award-winning journalist for the Sunday Independent. In 1995, she received the Press Freedom Award for pursuing Dublin mobsters even when her life was in danger. One year later, she was shot dead in her car as she waited at a traffic light. She had one son and was 37 years old. In over 30 years of sectarian violence in Northern Ireland, no journalist had ever been killed. Her death struck a chord with the nation and triggered the largest criminal investigation ever seen in Ireland.

Veronica was raised in Artane, north County Dublin. An avid sports fan, she played football and basketball for Ireland. Veronica studied accounting at Trinity and worked in PR before becoming an assistant to the politician Charlie Haughey. In 1990, she joined the Sunday Business Post as a business writer and later worked as a news reporter for the Sunday Tribune. In 1994, she took a position as a reporter for the Sunday Independent, Ireland’s largest circulating paper where she got a taste for investigative journalism chasing the story of a Catholic bishop who had fathered an illegitimate child.

Veronica worked tirelessly and soon became known internationally for her hard-hitting exposés. Using her background in business, she investigated the financial dealings of Dublin’s shadiest characters. She doggedly covered organised crime and the menacing leaders who orchestrated it. Though she only worked in the field for six years, she remains one of Ireland’s most well known journalists thanks to her determination to reveal the capital’s rampant drug and gang culture. Veronica was admired for her dedication. She would often chase a story for weeks and would go straight to the criminals themselves instead of relying on police information. Ireland’s strict libel laws make it illegal for journalists to identify wrongdoers by name, so Veronica coined colourful pseudonyms for the criminals she reported on: “The Monk’, ‘The Coach’, ‘The Penguin’ etc.

In October 1994, one month after Veronica had written an article detailing the life of Dublin’s recently-deceased drug lord ‘The General’, two bullets were fired through the window of her cottage. In January 1995, she answered her front door to a man who aimed a gun at her head. He lowered the gun and shot her in the thigh before escaping the scene. She believed the incident was in retaliation to an article about the largest robbery in Irish history in which she indicated a known con-man. Veronica left the hospital on crutches and went to visit every crime boss she knew, to let them know she was not intimidated. She said, “I vow that the eyes of justice, the eyes of this journalist will not be shut again. No hand can deter me from my battle for the truth.” The Sunday Independent had a security system installed at her home and the Gardaí Síochána provided a 24-hour escort, which she quickly cancelled.

In September 1995, Veronica visited the ex-convict John Gilligan at his horse farm, questioning how he afforded his lavish lifestyle with no apparent job. Gilligan, a known leader on the Dublin crime scene, ripped open her shirt searching for a hidden microphone and beat her. He later called her and threatened to rape and kill her son should she persist in publishing a story about him. Though frightened at the prospect of her son Cathal being harmed, she still persisted in the search for truth. In December 1995, she won the prestigious International Press Freedom Award from the Committee to Protect Journalists.

On June 26th 1996, Veronica stopped her red Opel at a traffic light near Clondalkin, Dublin and made a call to a friend. Two men on a motorcycle pulled up and one of them shot her five times. She died almost instantly and the men sped off. On July 4th, the nation honoured her life in a moment’s silence with people on buses, trains and in the street standing quietly paying their respects. The Gardaí wasted no time in launching a full criminal investigation.

Most suspicions surrounding her death have centred around Gilligan, who boarded a plane to Amsterdam the day before the murder. He was arrested a few months later in a London Airport with a holdall of laundered drug money. In November 1998, a man named Paul ‘Hippo’ Ward was charged with conspiracy to murder in the death of Veronica Guerin and sentenced to life in prison. In March 2002, the Court of Criminal Appeal overturned the murder conviction. Brian Meehan, accused of driving the motorcycle, also received life imprisonment, though he too was later acquitted he remains in prison on drug charges. The man believed to be responsible for firing the fatal shot, Patrick ‘Dutchy’ Holland, died in prison aged 70.

Ironically, Veronica was scheduled to speak at a Freedom Forum conference in London titled ‘Dying to Tell a Story: Journalists at Risk’ two days after she was murdered. On May 2nd 1997, her name and 36 others were added to the Freedom Forum Journalists Memorial.

In the wake of her death, a crackdown on organised gang crime ensued, with some 150 arrests made. The Criminal Assets Bureau was established in 1996 to carry out investigations regarding the proceeds of criminal activities. In 2000, Veronica was named in the International Press Institute’s 50 World Press Freedom Heroes. Her story was made into a Hollywood movie starring Cate Blanchett in 2003. Speaking about Veronica, Cate told a news conference, “'I think a spirit like Veronica’s only graces the planet once every 100 years or so. She was a phenomenal life force. It’s a gift, I think, that Veronica was such a complex, passionate, extraordinary human being first and foremost, and a journalist second.”