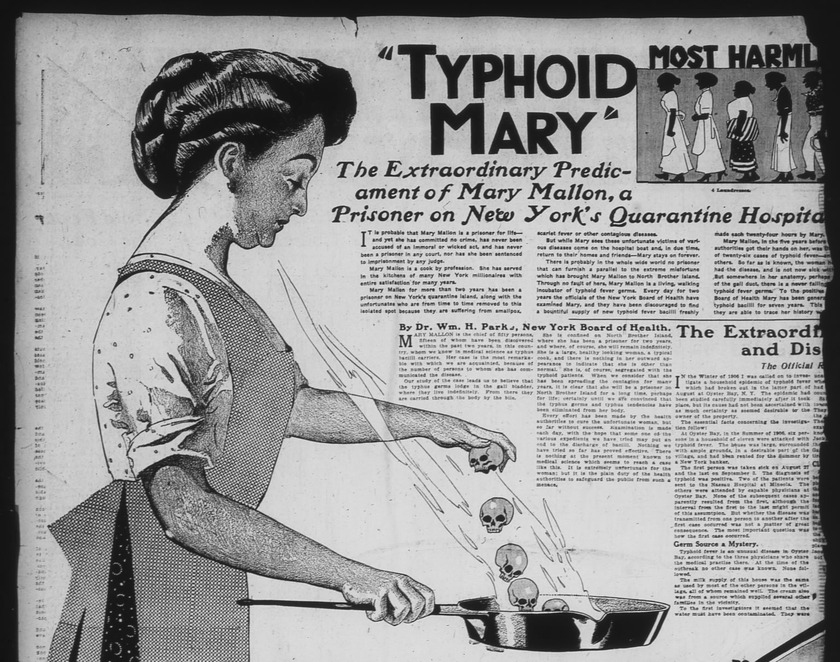 Mary Mallon, famously known as Typhoid Mary for the infection she carried and spread, was born in Cookstown, Co. Tyrone on 23 September 1869. Her story, and experience of the state’s early approaches to dealing with ‘healthy carriers’, continues to divide opinion.

Typhoid is a disease caused by the bacteria Salmonella typhi. It is transmitted through ingestion of contaminated food or water. Symptoms include fever, headaches and diarrhoea and, if left untreated, it can lead to full septicaemia and death. However, an individual can be a healthy carrier, completely asymptomatic and unaware of their condition. Mallon had the misfortune to be one of these healthy carriers. It is believed that she emigrated to America at the age of 15 where she found work firstly as a maid, then as a cook. She developed typhoid in 1900 and from then on infected around 50 people, three of them fatally. She was discovered in the summer of 1906, when the family and staff of Charles Henry Warren moved into a property in Oyster Bay, rented from the Thompson family. That summer, seven members of the household contracted typhoid fever. George Soper, a sanitary engineer, was brought in and immediately suspected the Irish female cook, who had mysteriously left her post three weeks after the outbreak.

A study into Mallon’s employment history indicated that typhoid outbreaks had marred her career. Between 1901 and 1907 she had worked in seven jobs; during this time 22 people immediately surrounding her had become sick and one had died. It is suggested that she never left forwarding addresses once she left a place of work, and, when Soper tracked her down and tried to obtain blood and faecal samples, she was stubborn and violent, approaching him with a carving knife! Mallon was equally vicious when pursued by Dr Josephine Baker of the New York City Health Department, hiding for several hours and eventually coming out “fighting and swearing, both of which she could do with appalling efficiency and vigour (Leavitt, p.46).” She was taken into custody and quarantined for three years (1907–1910) in a small cottage on North Brother Island. This ruling was based on the Greater New York Charter, which was written before the existence of healthy carriers had been discovered.

It is easy to understand Mary’s reticence to comply, considering that she did not present with symptoms, yet was accused of being a threat to public health. To her dying day, Mary denied being contagious and constantly fought against the typhoid carrier label, refusing to acknowledge government authority. Despite an appeal against her imprisonment in 1909, the judge ruled that she continue her quarantine, until a new Health Commissioner struck a deal with Mallon. In February 1910 he allowed her to go free, on the condition that she sign an affidavit stating she that would take the necessary precautions to prevent the spread of infection and cease work as a cook.

Her behaviour from this point was more controversial. Mallon returned to cooking. Some believe that she never had any intention of following the Health Commissioner’s rules and that she had a sinister, malicious side. Others feel that she did not understand the implications of her condition because of the lack of symptoms. In a New York American article on 20 June 1910 she was branded ‘Typhoid Mary’ with a capital T and depicted in a sketch, skulls forming in her breath. Mallon did work in other posts, as a laundress, for example, but it was well known that the pay for a cook was far higher, so her return to cooking is understandable.

In 1915, a significant typhoid outbreak at the Sloane Maternity Hospital in New York killed two people. Again, the trail led to the kitchen and an Irish woman matching Mallon’s description. (She was now using the pseudonym Mrs. Brown.) Mallon was again sent to North Brother Island, where she spent the remainder of her life. Although isolated, she was allowed to work at the island’s hospital and lab. She died on 11 November 1938.

Mallon’s story lives on to this day; even the term Typhoid Mary has become part of everyday parlance. She brought the status of the healthy carrier to the public’s attention for the first time and was essentially a victim of the infection’s effects on other people. She was not the most deadly of her contemporaneous typhoid carriers (Tony Labella, for example, caused five deaths), neither was she the only one to break the conditions of her freedom. But her legacy endures, while others’ do not. Leavitt suggests that this is because of her status as a working class Irish woman. It must also be due to the combination of her outright denial of her condition, refusal to cooperate, secretive return to cooking and blatant disregard for the Health Commissioner’s regulations.

Mallon’s case has been understood both as an unjust denial of personal freedom and a necessary sacrifice for improved public health, while Typhoid Mary herself has been presented as both a victim of misfortune and the mistress of her own demise.