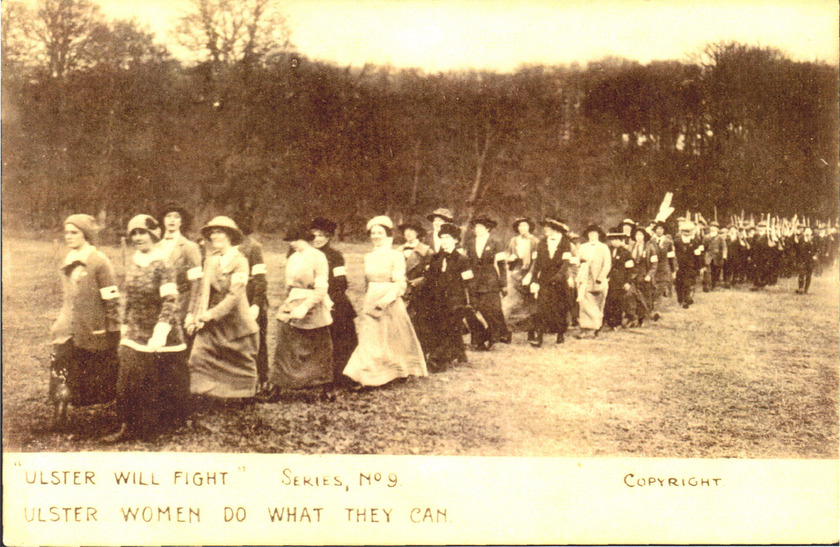 The UWUC was established on January 23, 1911 in the midst of the emerging Ulster Crisis. Home Rule for Ireland, opposed by Ulster Unionists, seemed probable. The Nationalist Party held the balance of power in Westminster, and the Liberal minority government had pledged to introduce the third Home Rule bill. In 1911, prior to this pledge, it had removed the veto power of the House of Lords, which had been used to defeat the second Home Rule Bill in 1893. Although women had been involved in opposing the first two Home Rule bills in 1886 and 1893, the establishment of the UWUC meant that women could organize formally for the first time.

The UWUC strove to be representative of every constituency, region, and class in Ulster. By the end of 1911 the UWUC had a membership of approximately 40,000 to 50,000. By 1913 its membership was estimated at between 115,000 and 200,000; and it had 32 associations in every constituency in all nine counties of Ulster, making it the largest women’s political organization at the time in Ireland. (This figure was corroborated by the Belfast News-Letter in September 1913. Nevertheless the leadership of the UWUC was socially and politically well connected, and drew on those networks of power and connections not unlike the male leadership of the Ulster Unionist Council (UUC).

According to the motion which founded the UWUC, “having arrived at a serious crisis in our Nation’s history…” its members were organized for one purpose: “the maintenance of the Legislative Union between Great Britain and Ireland, on the unimpaired integrity of which we believe our civil and religious liberties depend.” This was further institutionalized in the 1911 Constitution of the UWUC. It stated that the Council’s singular objective was “to secure the maintenance in its integrity of the Legislative Union [sic] between Great Britain and Ireland, and for this purpose to resist all proposals…which have for their object the establishment of any form of an Irish Parliament.”

Members of the UWUC objected to Home Rule on religious, economic, imperial, and constitutional grounds. Many were trained in public speaking and travelled throughout Scotland and England to rally opposition to Home Rule. Members of the UWUC also sent leaflets and newspapers to Great Britain—an estimated 10,000 weekly in 1913, according to the minutes of the UWUC. Some members organized public demonstrations against Home Rule. Others maintained the Unionist electoral registers in Ulster, canvassed on behalf of Unionist candidates, and raised funds for the anti-Home Rule campaign and the Unionist election fund.

The climax of Ulster Unionist opposition to the third Home Rule bill was Ulster Day—September 28, 1912. This was a solemn day. It began with religious services of worship and culminated in the signing of the Solemn League and Covenant by men and the Declaration by women. The signatories to the Declaration claimed to speak for “the women of Ulster”, and invoked God to protect Ulster and its “cherished place in the Constitution of the United Kingdom”, which the Declaration tied to Ulster’s loyalty to the British sovereign. Implying supportive, passive feminine nation-work the signatories to the Declaration “associate[d] themselves with the men”, while the Covenant invoked action in the masculine nation-work of defending their “equal citizenship in the United Kingdom” using “all means necessary.” The Declaration did not directly assert citizenship for its female signatories, but it invoked God to save Ireland (including Ulster) from “the calamity” of Home Rule. Both documents declared the signatories’ opposition to Home Rule.

Members of the UWUC organized locations at which women could sign the Declaration and worked to get women out to sign it. Although much of this work drew on traditional gender norms of a woman’s primary role being a maternal one, it cannot be argued that members of the UWUC were passive or peripheral to the Ulster Unionist movement and its campaign against Home Rule. Furthermore, some of this work, such as the public speaking tours upon which members of the UWUC embarked, carved out space for women within the sphere of party politics which was constituted through dominant Ulster Unionist discourses of that time as “male space”. Between 1913 and 1914 approximately 3000 women joined the UVF auxiliary as nurses, ambulance and dispatch riders, postal workers, typists, and intelligence workers under the auspices of the UWUC. Although much of this work was constituted as traditional feminine work, and supportive of the primary defensive nation-work of the men of the UVF, it nonetheless signaled women’s dedication to Ulster and that Unionists in Ulster were unified against Home Rule. It also expanded the spheres within which women were involved beyond that of clerical, administrative, or caring work to include that of driving, delivering messages, and intelligence. The partition of Ireland rendered the UWUC’s sole purpose moot. This forced its members to reconsider the purpose and goals of the organization which shifted to the maintenance of Ulster Unionist political power in Northern Ireland through support of the Ulster Unionist-dominated Belfast parliament. Members of the UWUC raised funds for Ulster Unionist election campaigns, canvassed on behalf of Unionist candidates in Northern Ireland, and educated women on their rights and responsibilities as part of the electorate, since married women and those over thirty years of age were granted the franchise in the UK in 1918.