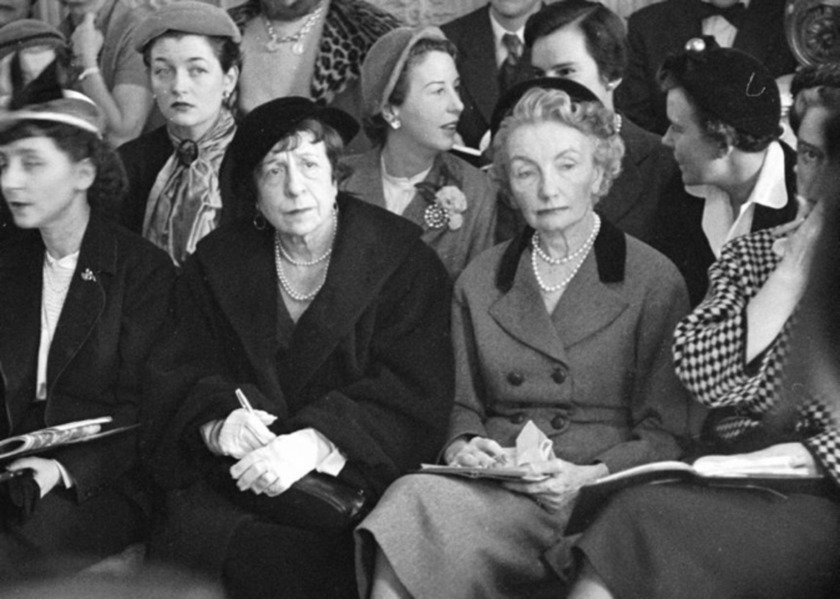 Sybil Connolly (1921 – 1998) was the first Irish woman to have the international world of fashion falling at her feet. Through her innovative use of traditional fabrics, she became the first designer to successfully target the American market and also change the way sophisticated women dressed.

Born in Swansea, Wales in 1921 Sybil moved to Waterford as a teenager with her mother after the death of her Irish father. She studied dress making in London from the age of 17 before returning to Dublin to work for the fashion house Richard Alan owned by Jack Clark. Here, she worked as Manager under the French designer Gaston Mallet. Mallet, formerly a designer at the house of Balmain, never made use of Irish fabrics. He left the house in 1952 and Sybil replaced him as Design Director. By using tweed, crochet and lace in vibrant colours and interesting silhouettes, she quickly attracted the attention of the American market and most importantly, Carmel Snow, the editor of Harper’s Bazaar.

Snow proved instrumental in launching Sybil’s career. In 1953, Snow brought press and buyers to Ireland where they were shown Sybil’s collections at a candle-lit dinner in the elegant Dunsany Castle. When Sybil travelled to America later that year, her full-length red cape and white crochet dress was on the cover of Life Magazine, accompanied by the caption ‘Irish Invade Fashion World’.

Her profile and popularity continued to rise in America throughout the late 1950s and 60s and she dressed many Hollywood stars including Julie Andrews and Elizabeth Taylor. She employed around 100 women back in Ireland who wove tweed and crocheted lace in their homes.

Undoubtedly, Sybil’s trademark was pleated linen, created by closely pleating up to nine yards of linen handkerchiefs to produce one yard of delicate fabric. It could be packed away and ‘emerge unscathed’, making it popular with the new modern woman. Jackie Kennedy, one of America’s most important style icons, wore one of Sybil’s pleated linen dresses for her official White House portrait.

Romantic peasant blouses, draped shawls and flannel petticoats reworked into couture fashion also proved popular with American consumers. However, the Irish were not always pleased with how Sybil presented and perhaps exploited the notion of her native country’s peasantry. However, she insisted that in this “terribly competitive business… unless Ireland can produce something distinctive, she will get nowhere”. She also kept her prices lower than other European labels (in the 1950s, a day dress was around $130 and a tailored tweed suit $180).

Sybil launched her own couture line in 1957 at the age of 36 and moved into 71 Merrion Square, Dublin, “the house that linen built”, as she fondly called it. Furnished in eighteenth-century antiques, the house was her design headquarters for the next 40 years.

Though she was popular with men, Sybil never married. She told the Daily Mail in 1957, “For the moment, I like to buy my mink and diamonds myself”. She was also a highly religious woman and had a priest bless each collection before its presentation. Indeed, Sybil also redesigned the habits of three orders of nuns and a perfume inspired by her was created by a group of Welsh monks.

Eventually, Sybil’s career began to falter as she proved reluctant to adapt to the fast-paced fashion world. She maintained that she knew, as all women designers should, that “good fashion does not need to change”. She renounced the new phenomenon for mini-skirts, firmly standing by what Christian Dior had told her, “A woman should show her curves, not her joints”. She also hated trousers and could not fathom why the new generation “set out to deliberately make themselves look so awful”.

In February 1959, a New York Times review said that Sybil’s latest collection “showed tweeds, as she always has and always will”. In 1992, Sybil’s pleated linen skirts, lace blouses and tailored coats looked almost exactly as they had 40 years previously.

Towards the end of her life, Sybil turned her hand to interiors: she was responsible for the refurbishment of a Swiss Cottage in Tipperary, penned books on Irish homes and gardens, and designed both tableware for Tiffany & Co and glasses for Tipperary Crystal.

Her important legacy was made evident in the auction that followed her death in May 1998, when thousands of visitors came to 71 Merrion Square over the course of four days to bid for 600 lots. Her contribution to fashion and her influence as a pioneering Irish business woman cannot be underestimated.