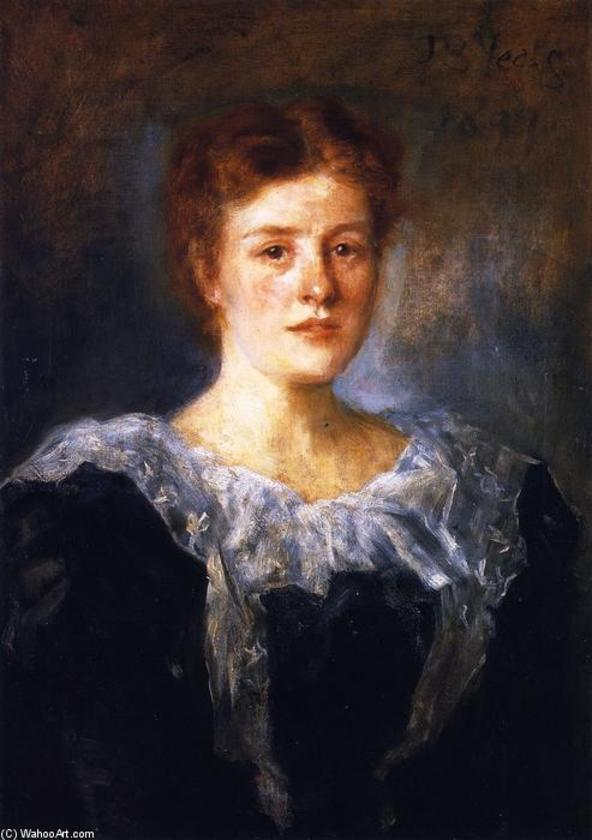 Susan Mitchell (1866-1926) was born in Carrick-on-Shannon, Co. Leitrim in 1866, the fifth of seven children. After the death of her father, the family was split up amongst extended family members. Susan was sent to her aunts in Dublin, where she was to receive an Anglo-Irish education at Miss Abbott’s school on Morehampton Road. She later bemoaned the education she received there, saying that the curriculum for young ladies was limited allowing for no creativity, and significantly, instilling no pride in their country:

“An Irish girl … is given only the barest outline of the history of her own country and always in a subservient and secondary place to the histories of other countries… At the most enquiring and receptive age, when the strings of being are most sensitive, a heavy hand is laid on the wires and all their melody is muted.” (Pyle, 12)

Living with her three aunts on Wellington Road, next door to the literary Purser family, Susan had her first encounter with the striking figure of the artist John Butler Yeats (JBY). These meetings would prove fateful, as later Susan would become a dear friend of the older Yeats and become close to his daughter Lily especially.

In 1897, Susan joined the Yeats family in London at their home in Bedford Park, as a companion to Lily, who was recovering from her period of working for Morris & Co. Susan too was ill with tuberculosis, which was to plague her for the rest of her life. In this house she came into contact with many figureheads of Ireland’s cultural renaissance, such as Lady Gregory, Constance Markievicz, Katharine Tynan and Edward Martyn. Susan noted:

“Always the talk turned back to Ireland and it seemed to me that in this London suburb I saw Ireland truly for the first time; as one cannot see oneself in a mirror by pressing one’s nose against the glass, I had to leave my country to find her.” (Pyle, 67)

Susan spent eighteen months with the Yeatses, returning to Dublin in 1899, where she began to establish herself as a writer. She entered the Irish literary world as the sub-editor of The Irish Homestead, whose editor was George ‘AE’ Russell, with whom she shared a ‘lordly dream’ of Ireland. Though she began writing before she met Russell, working alongside him, his influence on her mystic verse was inevitable. The creative influence was mutual, and Susan was one of Russell’s dedications in his collection The Divine Vision (1904).

Though she became a central figure in Dublin’s vibrant artistic circles, hosting ‘At Home’ evenings, Susan’s illness steadily worsened, and she underwent several operations throughout her lifetime. Nonetheless, Susan frequently published a number of poems and satirical commentaries in various magazines. During the Hugh Lane painting controversy (1905), she composed a ballad, in which she cleverly condensed the cultural Dublin of the day into two verses, gently digging at the mannerisms and vanities of some of the characters involved. Her ballads were celebrated in Dublin’s social circles and she would sing these in various Dublin drawing-rooms:

A.E. was there with his long hair,
And Orpen, R.H.A.,
Sir Thomas Drew was in a stew,
And looked the other way,
But Martyn, who had left the stage
To play the patriot’s part
Called for Hunagrian policy
In everything but art!

And John B. Yeats stood near the gates
With mischief in his gaze,
While W.B., the poet, he
Pondered a telling phrase,
You’ll find it in the Freeman
After a day or so,
And Moore was there – the same who is High Sheriff for Mayo

By 1907, the elder JBY had relocated to New York, and while their correspondence continued regularly by letter, Susan had lost her closest confidante. Nonetheless, 1908 was the year of glory for Susan in Dublin’s literary world, as Aids to the Immortality of Certain Persons in Ireland … Charitably Administered, a book of ballads, with illustrations by Beatrice Elvery, was published. The Living Chalice, her most memorable book of verse was published in December of that same year. JBY felt the book of 24 poems showed her to be ‘poet through & through & with intensity’ (Pyle, 125).

Since her time as the columnist ‘Bríghid’ at The Irish Homestead, Susan for a long time had felt strongly about the role of women in Irish society. Susan composed a song for the United Irishwomen, ‘To the Daughters of Erin’ (1910), which she published in the second edition of The Living Chalice:

Our mother is still young and fair,
Let the world look into your eyes
And see her beauty shining there
Grant of that beauty but one ray,
Heroes shall leap from every hill,
To-day shall be as yesterday,
The red blood burns in Ireland still.

In 1911, Susan was contributing book reviews to The Irish Times, and was acting as a consultant to aspiring young writers despite the fact that her health remained precarious. In 1915, Susan was commissioned to write a biography of the writer George Moore, to feature in the Irishmen of To-day series. The two were connected in Dublin literary circles, having first met each other in London and each sincerely admired the other. Susan completed the book in the tumultuous Spring of 1916, commenting sadly ‘It is a heavy ending for a book begun with a light heart. With every twenty-five years of Irish life we expect a tragedy, with every fifty years it inevitably comes.’ (Pyle, 167) Despite her pacifism, Susan’s sympathies were with the condemned leaders of the Rising. Amongst all this upheaval her book on Moore was published in October 1916 to critical acclaim, including praise from contemporaries such as George Bernard Shaw and James Joyce (Joyce was to later include Susan in Finnegan’s Wake as ‘Miry Mitchel’.)

Susan continued to compose ballads and launched into a career as a literary critic. She delivered a lecture on John Butler Yeats to the National Literary Society in December 1919, quoting extensively from her correspondence with JBY. Irish life generally continued to be bleak, as sporadic guerrilla warfare erupted around the countryside with the Black and Tans attacking creameries and villages. In response to a remark made by Lloyd George in November of 1919, Susan wrote a satire entitled ‘Troublesome Nations’, which went into the Christmas issue of Lady of the House.

In December of 1919, Susan moved to her final home, at 77 Rathmines Road, with her sister Jinny. Susan continued to review regularly for the Freeman’s Journal, and contributed as a journalist and commentator to The Irish Statesman. By this stage she was profoundly deaf, yet she was unafraid to express her opinion on the current situation of Ireland. In 1922, as the Irish Free State came into being, though Susan’s output as a writer was small her wit was as sharp as ever, and in 1923 she composed ‘The Wail of the Pseudo-Gael’, a satire mocking the dreams of herself and fellow writers, of a cultural Ireland that was never to be.

Increasingly she found herself confined to her bed for many weeks, yet she still maintained an active social life, attending the Yeats sisters ‘very select’ social evenings, and was a regular at the Abbey theatre’s performances. In January 1926, she had an operation, from which she never fully recovered. She passed away in a nursing home on March 4th, 1926, with her sister Jinny maintaining a vigil by her side. All of literary and scholarly Dublin attended her funeral at Mount Jerome Cemetery including the Yeatses, the Pursers, Douglas Hyde. Tributes poured in, a devastated Russell made her poetry the theme of The Irish Statesman ‘Literature and Life’ article, poignantly declaring:

“I found in her one of those rare natures whose spirituality turns them to the world, taking it with outstretched hands and laughter as if they knew what precious ones were in its dross and they had the instant alchemy by which the ore was revealed.” (Pyle, 225)