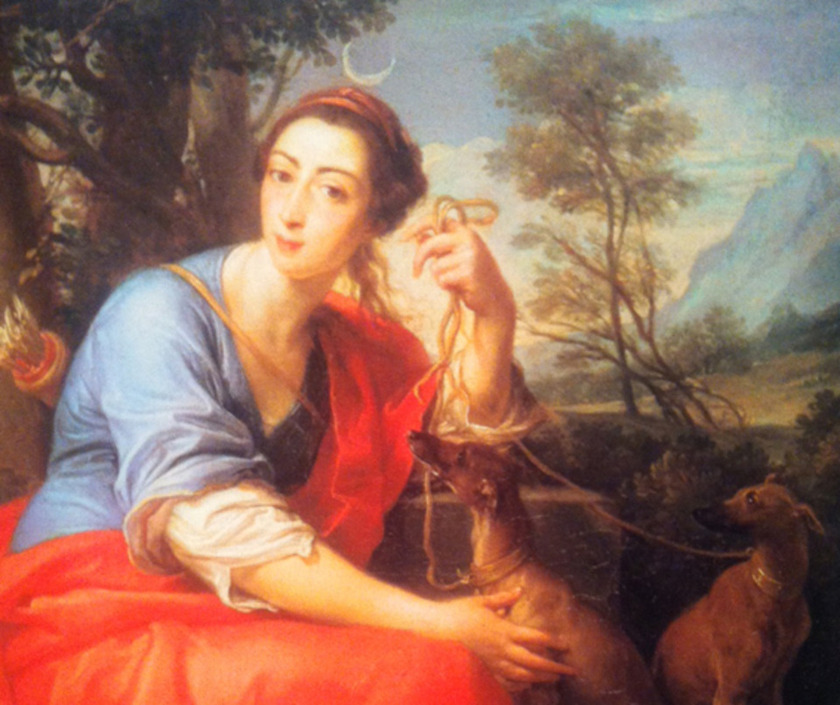 ("Portrait of a Lady as Diana" by Pompeo Batoni)

Margaret Leeson, also known as Peg Plunkett, was Dublin’s most famous brothel madam in eighteenth-century Ireland. Clever, witty and beautiful, she was a leading figure in the hedonism set of Georgian Dublin and counted lords, lawyers and con-men among her clientele. Born in Westmeath in 1727, Peg’s ailing father left her abusive brother Christopher in charge of the house after their mother’s death and Peg soon fled to Dublin to escape. She took up with a Mr Dardis, who got her pregnant and set her up with a house. When she lost the child, however, the man and home soon followed. After this she was ‘kept’ by a wine merchant, but before long became the kept mistress of a Mr Leeson.

Peg took his last name without ever marrying him, but was thrown out when he discovered that she’d been carrying on with other men – a double standard that incited her anger. One of the men in question was a Mr Lawless, who Peg went on to have a tempestuous relationship with. They fought relentlessly, both falling prey to wild jealousy. According to Peg, “If, at the play, I even accepted an orange, or returned a salute from any gentleman, he immediately insisted on our return home, though the performance was not half over.”

Peg and her lover parted ways when he sailed off to America, leaving her heartbroken. She then set up her first brothel with her right-hand-woman and fellow courtesan, Sally Hayes. The house was located on Drogheda Street, but was vandalised one night by a notorious Dublin gang of wealthy ne’er-do-wells known as the Pinking Dindies. Peg took the gang leader to court, winning damages, and moved her establishment to Wood Street, before eventually settling in Pitt Street, on what is now the site of the Westbury Hotel.

Hers was a rambunctious existence, helped in no small part by a wicked sense of humour. (The kind that saw her attend a masquerade ball dressed as Diana, the goddess of virginity.) She was also a dab hand at surreptitious advertising, and was the first woman to wear a bell hoop in Dublin, making voluminous skirts synonymous with Peg Plunkett and her coterie of girls.

Reportedly, she insulted the Prince Regent twice while visiting London, first when she followed him into a shop, saw him ordering striped waistcoats and loudly ordered the same ones to be made as a gift to her shoemaker, causing him to storm out. A few days later, while riding along the road with three friends on the way to dinner, she saw the prince coming along behind them in his carriage. Her gentlemen friends instructed her to move out of the Prince’s way but Peg brazenly rode alongside him, while he could do nothing but glare. When her friends asked why she didn’t move aside, she replied “I think part of the road was for my use, as well as for that of the King, and if you English are servile and timid, we Irish are not.”

When Signor Carnavalli (a celebrated violinist) came to the theatre at Smock Alley to perform Italian operas, he barred certain kinds of people from attending, or as Peg put it, “every lady of my description”. She turned up at the theatre nonetheless, took her usual seat and, on Carnavalli’s orders, was unceremoniously thrown out by the doormen. Furious at this ill treatment, she got a warrant against them for assault and robbery (for detaining the ticket she had paid for) and returned to the theatre with four of the nastiest bailiffs she could find, who then hauled Carnavalli and the doormen off to Newgate prison.

After 30 years of running the brothel, Peg decided to reform her ways and retire to Blackrock. Unfortunately for her, the IOUs from wealthy men that she had stacked up over the years proved worthless and she wound up in a debtor’s prison. In order to raise money, she decided to write her memoirs, which put the fear of God into Dublin’s social circles. The first two volumes were a hit, but Peg dies in 1797, aged 70, before the third volume had been published.

An outspoken and shrewd woman, Margaret Leeson is perhaps best summed up by this story: One night, Charles Manners (Lord Lieutenant of Ireland) appeared in the regal box at the theatre on the same night that Peg was attending the show with her girls. Some wags in the gallery began shouting at her “Oy Peg! Who slept with you last night, Peg?” Peg gave them an imperious look, threw a dramatic glance at the Lord Lieutenant and in a scolding tone, said: “Manners, you dogs!”