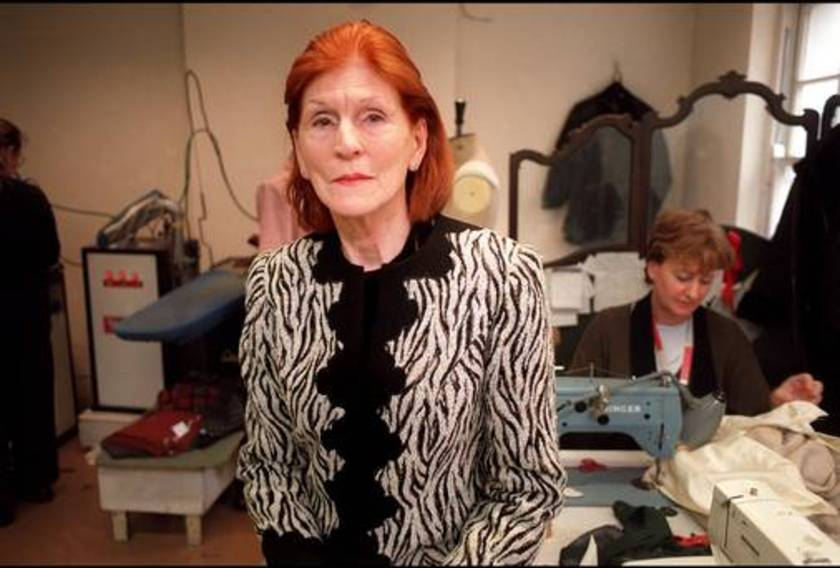 Pat Crowley at her studio. Photo: Tony Gavin (via The Irish Independent)

Pat Crowley (1933-2013) was a trailblazing fashion designer with a long and prosperous career, a “thoroughly modern woman” who dressed film stars and Presidents in her avant garde creations.

Pat was born Patricia Vernon in Galway, the oldest of seven children. Pat’s mother advised her that a woman should always know how to make her own clothes, prompting Pat to enrol in the newly opened Grafton Academy in Dublin to study fashion design. Upon graduating, Pat gained employment as an air hostess with Aer Lingus, an illustrious career choice at the time. Pat was a member of the crew on the first transatlantic flight from Ireland.

Pat met her husband, the businessman Conor Crowley, at a rugby match. After their marriage she left Aer Lingus, as was customary at the time. Not content to stay at home, Pat decided to continue working and took a job working for Irene Gilbert, a prominent Dublin couturier, in 1960. Under Irene, she learned the ins and outs of the fashion business; sales, marketing and buying.

In 1968, Pat launched her own knitwear collection and a shop on Duke Street, Dublin. She took the traditional Irish woollen jumper and put her own innovative spin on it. She even pioneered knitted trousers. Her famed Duke Street salon stocked Valentino, Thierry Mugler and Emanuel Ungaro to supplement her own designs. She was also an astute business woman, charming men into spending a lot of money on Pat Crowley designs for their wives.

Pat became renowned both at home and abroad for her bespoke and inventive creations. At one stage she employed 600 knitters around the country in order to keep up with demand. She dressed Miranda Iveagh, one of Ireland’s best dressed women, who said she always felt “frightfully happy” in Pat’s feminine designs.

Having cut her teeth overseeing international business for Irene Gilbert, Pat was adept at selling her creations to the elite socialites of America, including the Kennedy women and the Whitneys. Pat once told a US newspaper, “even though we are in the middle of a financial recession, there is no need to suffer a personal depression, by denying ourselves beautiful clothes.”

In 1999, after the sudden death of her husband, Pat was diagnosed with Alzheimer’s disease. She retired from public life and was cared for by her three children Lisa, Fiona and Vernon. Pat passed away on December 16th 2013, aged 80.