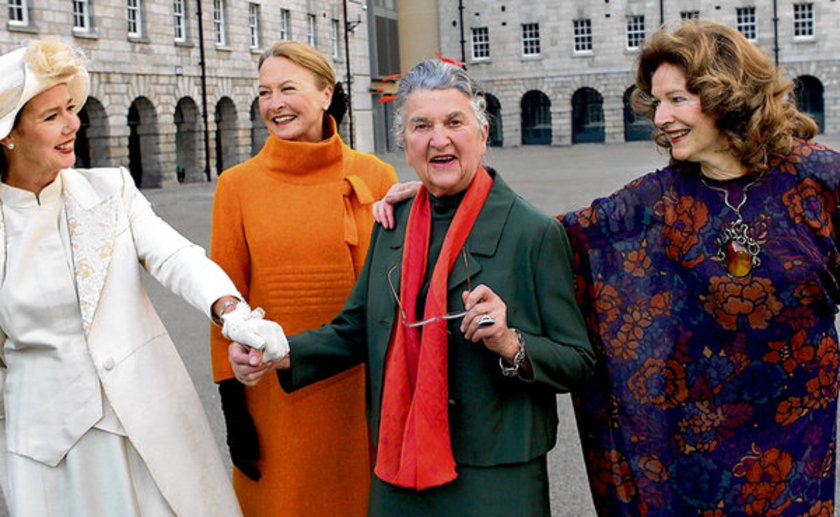 Neillí Mulcahy (1925-2012), an innovative Irish designer, was one of the founders of the Irish Haute Couture Group. She married Parisian-standard couture techniques with traditional native fabrics and designed the Aer Lingus uniform in 1963.

Neillí was born in Dublin in 1925 to Richard Mulcahy, Army General later to become a cabinet minister, and Min Ryan, a Cumann na mBan activist. She attended the Loreto Convent on St. Stephen’s Green and began to study science before discovering her true calling; fashion design. She trained in the Grafton Academy of Dress Design, going on later to teach pattern cutting classes. Neillí was linked to the Grafton Academy for her whole life, even after she retired from the fashion industry; she continued judging student’s final graduate collections each year.

In 1951 Neillí trained at the atelier of Parisian designer Jacques Heim for six months. Heim is credited with designing the first two-piece bathing suit, the “atome”, and his list of distinguished clients included Sophia Loren and Gloria Swanson. Then in October 1952, utilising the techniques she learned under Heim, Neillí opened her own salon on South Frederick Street, specialising in evening dresses and bridal wear.

Elsa Schiaparelli, one of fashion history’s most important luminaries, chose Neillí as a recipient for an award under the National Agricultural and Industrial Development Association Show in 1953; a huge honour that further boosted Neillí’s rising star.

Like her contemporary Sybil Connolly, Neillí was an advocate of using home-grown fabrics, particularly wool and tweed. She also collaborated with manufacturers and textile designers to produce fabrics such as poplins and linen, experimenting with vibrant colours and new textures. She used these in her uniform commissions, custom designing for CIE, Great Southern Hotels and the Aer Lingus air hostess uniforms, executed in Donegal Tweed and comprised of a three piece navy and green chequered suit, navy handbag and matching gloves.

Neillí acquired a loyal clientele in America and established a mail order business supplying her signature hand woven creations for them. From beaded ball gowns to tailored suits, Neillí is best remembered for her modern, sporty and practical garments that satisfied the overseas demand for a traditional Irish aesthetic that didn’t stray into cliché territory. In 1959 she garnered even more international recognition when President Sean T. O’Kelly visited the US with his wife Phyllis Ryan (her aunt) wearing Neillí’s designs.

Mulcahy, along with Irish designers Irene Gilbert and IB Jorgensen, founded the Irish Haute Couture Group in 1962, with the aim of further promoting Irish talent abroad.

She is described as modest, unassuming and a dedicated working mother and wife; while running her salon she had six young daughters with husband, Tommy Bacon.

Neillí died peacefully after a short illness on May 6th 2012.