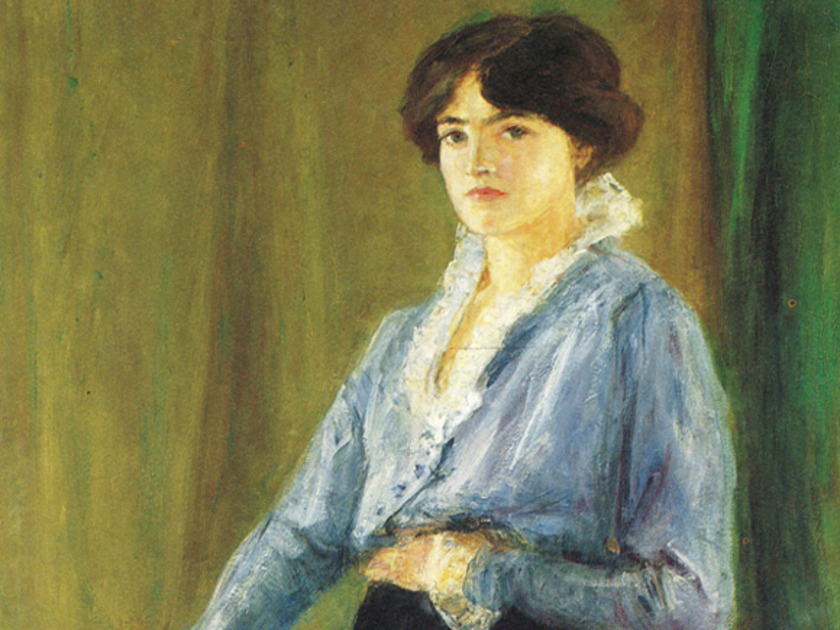 Molly Allgood (or Maire O’Neill) sister of Sara Allgood, was an Irish actress, famed for her dramatic talents on stage and screen. W.B. Yeats praised the Allgood sisters in his Nobel Lecture of 1923 as “players of genius”. A true star of the early days of the Abbey Theatre, Molly was described as “sophisticated, lyrical and subtle”. Molly’s unique life story is tied up with that of the Irish literary great, John Millington Synge, at a time of cultural and political renaissance in Ireland.

Molly was born on the 12th of January 1885. She, along with her older sister Sara, was born into an unhappy family of a strict Protestant father and a Catholic mother. Their father condemned the girls’ love of song and dance, a passion nurtured by their mother in secret. Around 1903, the sisters joined Maud Gonne’s Inghidhe na hÉireann, or Daughters of Erin, a women’s organisation with a political, social and feminist agenda that encouraged women to pursue the arts. It was from here that they joined the Irish National Theatre Society and were coached by Willie Faye. In her early career, Molly decided to separate herself from Sara by changing her name to Máire O’Neill.

She first appeared on stage as a “walk-in” part in Synge’s The Well of Saints (1905), immediately grabbing the attention of the handsome playwright. Molly’s beauty was famed, with Coxhead describing her as “a combination of virginal Irish innocence and strong come-hither, so well calculated to drive men mad”. Synge was so taken that she became the muse for his greatest works, such as The Playboy of the Western World (1907) and Deirdre of the Sorrows (1910). Yeats and Lady Augusta Gregory were wholly against their blossoming relationship, as were the Synge family. Molly’s status as a poor Catholic actress was not deemed compatible with his affluent Protestant background, and neither was her rebelliously fiery nature a match for his nervous personality and constant illness. Letters from Synge to Molly were often returned with unimpressed responses scrawled across, such as ‘IDIOTIC’! However, they did make this tempestuous union work, becoming engaged in 1906. His love for her is powerfully evident in his correspondence, compiled into a collection by Saddlemyer (1983). He writes:

“Dear Heart, in four days - damn them - I will be in the Seventh heaven again, with my little changeling, my little jewel, my love and life, in my arms”

“Little Heart, this morning I was brimming over with tender things to say to you… I was going to tell you how proud I was to be a man of letters so that I could write my little changeling things other men wouldn’t know how to get into words”

Although Molly’s replies were destroyed after Synge’s death, perhaps to invalidate their relationship, his letters capture the essence of his love for her, she was his “dearest little treasure”, his “heart’s delight”.

During this period, she also brought to life a role that would be forever associated with her, that of Pegeen Mike in Synge’s Playboy of the Western World (1907). Unfortunately their personal and public successes were not to last, as Synge succumbed to Hodgkins disease in March 1909. He left Molly a small income that would serve to help her in later financial difficulties, when the successes of her early career fell into decline. She remained at the Abbey until 1911 when she married G.H. Mair, a Manchester Guardian journalist, with whom she had two children. This union led her to England with roles in Shakespeare’s Merchant of Venice (1913) and further afield to America, where she starred in General John Regan (1914). Her brother’s death in 1915 was extremely difficult for Molly and she turned to alcohol, a vice that would plague her. In 1916 she returned to the Abbey for a part in Lennox Robinson’s The Whiteheaded Boy.

In another tragic twist, her husband passed away suddenly in 1926. Much to the dismay of her children, she married an actor called Arthur Sinclair six months later. The couple toured with Sara for several years, although the sisters were not always on friendly terms. Molly also starred on screen, most notably as Maisie Madigan in Hitchcock’s adaptation of Juno and the Paycock (1930), alongside Sara in her pivotal role as Juno. In later years, she suffered further trauma, as her son was killed and her marriage dissolved. Despite her waning career and struggles with alcoholism, she continued to act up until her death, (she had been scheduled to broadcast a live radio version of O’Casey’s The Silver Tassie at the time). She passed away on the 2nd November 1952 from burns she received after falling into the fireplace of her home.

Molly Allgood was a magnificent character in the early history of the Abbey Theatre. She is remembered for being the first to bring famous roles such as Pegeen Mike and Deirdre to life, as well as a long career on stage and screen. However, the role she will forever be synonymous with is that of the one true love of J.M. Synge. His letters to her make for a heartbreaking read, considering how quickly and brutally their future together was ended. For many years their relationship was hidden from his life story, often referred to as an “affair”, despite their legitimate engagement. Their romantic bond transcended wealth, religion, age and status and their story fascinates to this day. It was most recently the subject of Ghost Light by Joseph O’Connor (2010). This dramatic visceral novel is written from Molly’s perspective, an ageing alcoholic recluse reminiscing to herself about her illustrious past, while her present spirals into the dark abyss.