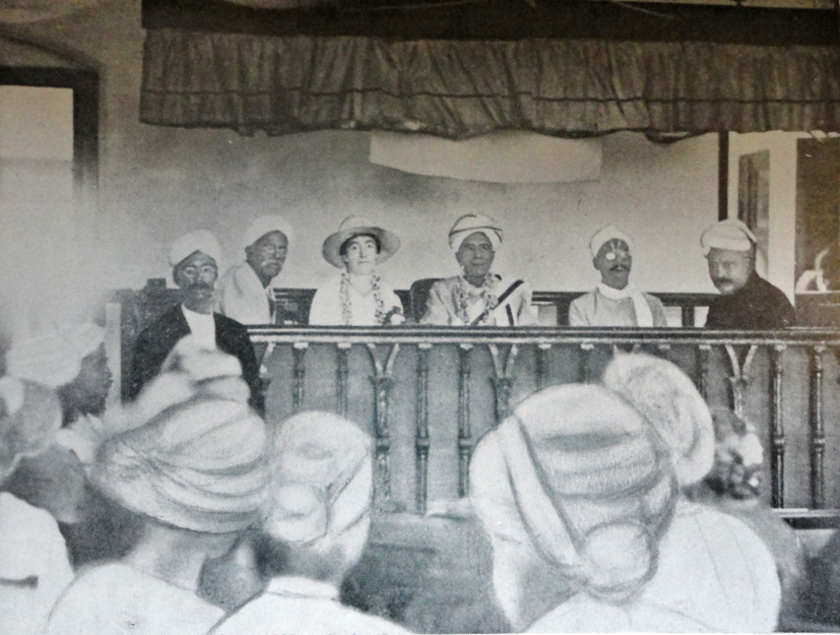 Margaret Gillespie was born in Boyle, Co. Roscommon in 1878 and brought up in a unionist and Methodist household. From an early age, however, she took an interest in the nationalist cause. The oldest of 15 children, Margaret earned a scholarship to the Victoria High School for Girls in Derry and matriculated with distinction in 1898. Later she studied at the Royal Academy of Music in Dublin, graduating with a B.Mus. from the RUI in 1902.

She married James Cousins, an aspiring poet and playwright. At their wedding banquet Margaret announced her commitment to vegetarianism, as practised by her husband, and was later appointed honorary secretary of the Irish Vegetarian Society.

At a time when women usually gave up their jobs after getting married, Margaret decided to maintain her independence and worked part-time as a music teacher. She became familiar with many of the leading literary figures in Dublin, among them James Joyce and George Russell, with whom Margaret and her husband shared an interest in theosophy. She experimented with automatic writing and astrology, and acted as a medium at séances in her home. She joined the Irish Women’s Suffrage and Local Government Association and later founded the militant, non-party-affiliated Irishwomen’s Franchise League with Hanna Sheehy Skeffington. Margaret regularly addressed its open-air meetings in Dublin and around the country.

Her husband James was in touch with English suffragists and in 1909 worked for the Women’s Social and Political Union in London. In November 1910 she was among the six Irish representatives at the ‘Parliament of Women’ in Caxton Hall, London. During her stay in London she was convicted of smashing the windows at 10 Downing Street and served a one-month sentence in Holloway prison. Maragret was jailed again for one month in 1913 with fellow activists for breaking the windows at Dublin Castle. During their imprisonment in Tullamore jail, these activists successfully fought for political status in prison after a brief and well-publicised hunger strike.

In her half of We Two Together (1950), co-written with her husband James Cousins, she wrote:

In Ireland our work for women’s suffrage was chiefly propagandist through open-air meetings in summer and indoor meetings in winter. The introduction of a Home Rule Bill supported by the Liberal Party looked very hopeful for the gaining of freedom of Ireland at long last. But the Bill made no mention of Irish women being made citizens of their own country.

We stumped the country pointing out the injustice of the omission and demanding an amendment in the proposed Home Rule Bill. The Irish Nationalist Members of Parliament were heckled about it wherever they spoke in public. They did not like this. They objected to women butting into their men’s way of winning political freedom. But the era of dumb, self-effacing women was over. Everywhere we explained that the Irish Women’s Franchise League was not identical in its militant methods with the English suffragettes.

We were not attacking shop-windows; we had no Liberal by-elections, no Cabinet Ministers in Ireland. We were as keen as men on the freedom of Ireland, but we saw the men clamouring for amendments which suited their own interests and made no recognition of the existence of women as fellow-citizens. We women were convinced that anything which improved the status of women would improve, not hinder, the coming of real national self-government.

Owing to their precarious financial situation, the Cousins moved to Liverpool and in 1913 Margaret was imprisoned for suffragette activities in Mountjoy and Tullamore Gaols. She went on a hunger strike and was released in June of that year. In 1915 Margaret and James settled in India. There Margaret became involved in both the theosophical movement and the women’s rights movement. In 1916, while she was engaged as a teacher, Margaret became the first non-Indian member of the Indian Women’s University at Poona.

In 1917 she helped Dorothy Jinarajadasa, a British theosophist, to organise the Women’s India Association, and became the editor of its journal, Stri Dharma, which was published in English, Telugu and Tamil versions.

Margaret was then employed as headmistress of the National Girls’ School in Mangalore. James played an important role in organising the first all-India women’s conference in 1926 and the all-Asia women’s conference. Margaret also engaged in charitable work through the Children’s Aid Society, the Women’s Homes of Service and ‘baby welcomes’. In December 1932 she was arrested for having addressed a meeting in Madras to protest against the inclusion of the emergency ordinances into the penal code, and was imprisoned in Vellore jail until the following October.

Margaret Cousins was a prolific writer. In Ireland, Britain and India she wrote letters, articles and pamphlets on theosophy, education and women’s rights, and with her husband compiled a joint autobiography, We two together. When Margaret suffered a stroke at the age of 65, she received financial help from both her admirers and the Indian government in recognition of her services to the country. She died on 1 March, 1954 in Adyar, India.

James H. Cousins and Margaret Cousins, We Two Together, Madras, 1950.