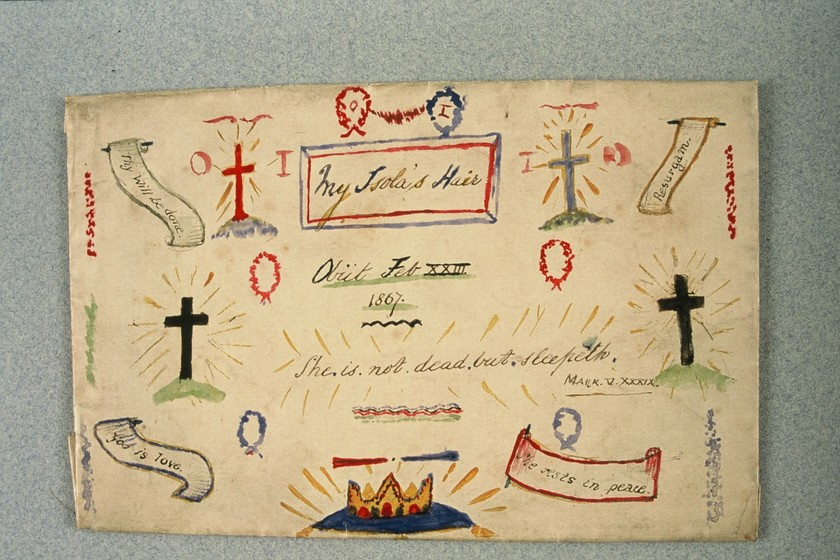 When the daughter Jane Wilde had apparently longed for arrived on 2 April 1857, her family was complete. Everyone doted on Isola Francesca Emily Wilde, especially her older brothers: Willie, who was four-and-a-half years old when she was born, and little Oscar, who was just two-and-a-half. Jane described Isola as “the pet of the house,” adding: “She has fine eyes & promises to have a most acute intellect – these two gifts are enough for any woman”. She named her daughter in tribute to Iseult of Ireland from Celtic legend, wife of Mark of Cornwall and lover of the Cornish knight, Sir Tristan. Isola shared Francesca with her mother; Emily was the name of her maternal aunt.

According to Oscar, little Isola lit up their lives like “a golden ray of sunshine dancing about our home”, but the joy she brought was snatched away far too early. In February 1867, Isola, who had been ill with fever but appeared to be recovering well, was sent to recuperate with William’s sister Margaret Noble and her husband, the Reverend William Noble, at the Glebe at Edgeworthstown, County Longford. On 23 February, two months short of her tenth birthday, Isola’s health took a dramatic turn for the worse. Although Jane and William, who was an eminent surgeon, reached their daughter’s bedside as quickly as they could, she died within hours of “a sudden effusion on the brain”, most probably meningitis.

Jane was devastated by the loss of this “most lovable, hope-giving child”. Describing Isola as “the radiant angel of our home – and so bright and strong and joyous”, she spoke of an evil foreboding that had come over her months beforehand. This susceptibility to superstitious dread was inherited by Oscar. When she recounted her loss in a letter to a Swedish friend, Lotten von Kraemer, she wrote: “…a sadness is on me for life, a bitter sorrow that never can be healed”. She took consolation in her sons and assured another friend, John Hilson: “I have a belief that God will leave them to me for it seems to me as if I could bear no more sorrow and live”. Sadly, there would be far more sorrow in her life.

This bereavement much affected William too. He erected a monument to his lost daughter in the grounds of Moytura, his beloved country retreat, and he escaped there as often as he could. Oscar, then aged 12, was shattered. The doctor who attended Isola during her final days remembered Oscar as “an affectionate, gentle, retiring, dreamy boy whose lonely and inscrutable grief found its outward expression in long and frequent visits to his sister’s grave in the village cemetery”.

Decades later, in The Story of an Unhappy Friendship, Robert Sherard, one of Oscar Wilde’s many biographers, recalled that “when he spoke, as he often did, of his sister who was dead, his wondrous eyes softened”. After Oscar died, friends found a beautiful, hand-decorated envelope containing a few golden strands of hair among his meagre possessions; it was labelled ‘My Isola’s Hair’. In his essay ‘Impressions of an Irish Sphinx’, Professor Owen Dudley-Edwards suggests that Oscar was “haunted by the idea of Isola’s survival”, and that her death had “the greatest impact on his fictional creativity”. He identifies echoes of her throughout his writing: the young girl in The Canterville Ghost whose love transcends death, Dorian Gray, the beautiful young man who never grows old, and elsewhere.

Perhaps Oscar’s most lasting testament to his beloved little sister is his beautiful poem Requiescat, which he wrote in her honour. When William Butler Yeats asked his permission to include it in an anthology of Irish verse he was compiling in 1894, Oscar replied: “I don’t know that I think Requiescat very typical of my work”. Yeats used it anyway and it was hailed by the Birmingham Post as “the brightest gem in this collection”.

Requiescat Tread lightly, she is near Under the snow, Speak gently, she can hear The daisies grow. All her bright golden hair Tarnished with rust, She that was young and fair Fallen to dust. Lily-like, white as snow, She hardly knew She was a woman, so, Sweetly she grew. Coffin-board, heavy stone Peace, Peace, she cannot hear Lyre or sonnet, All my life’s buried here, Heap earth upon it

At some point, the headstone erected by the Wilde family in memory of Isola disappeared from St John’s Graveyard in Edgeworthstown and its location was never discovered. In 2013, the people of the town commissioned a beautiful replacement inscribed with the first stanza of Requiescat. It is situated just inside the gate of St John’s Churchyard.

Wilde’s Women by Eleanor Fitzsimons will be published by Duckworth Overlook in October 2015.