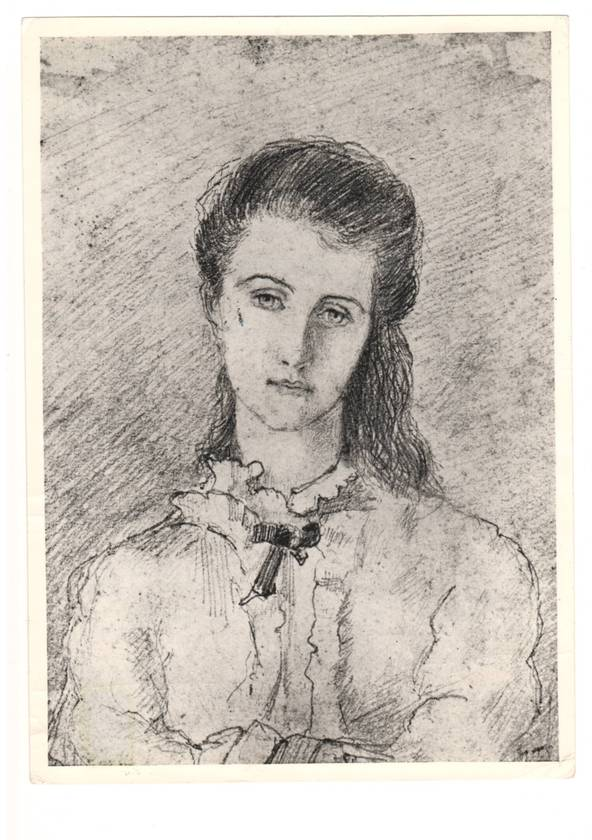 On 6 August 1876, Oscar Wilde had a date with a strikingly beautiful young woman: tall at 5’8”, she had soulful grey-blue eyes and lustrous chestnut hair. Oscar, besotted, gushed to a friend:

“I am just going out to bring an exquisitely pretty girl to afternoon service in the Cathedral. She is just seventeen with the most perfectly beautiful face I ever saw and not a sixpence of money. I will show you her photograph when I see you next.”

Florence Ann Lemon Balcombe was born in Falmouth, Cornwall on 17 July 1858, while her father, Lieutenant-Colonel James Balcombe, was stationed in Bombay. Given his involvement in the Crimean campaign, it is thought she was named for Florence Nightingale. The family moved to Ireland in 1860, when Florence was two years old.

Florence’s beauty was remarked upon constantly. Her son Noel testified that she remained beautiful into her seventies, and he remembered men standing on their seats to catch a glimpse of her when she went to the theatre. Society magazine The Era described her as “one of the most brilliant constellations at the first Drawing-Room of the Dublin season”. Prime Minister William Ewart Gladstone referred to her simply as “the beauty”, while George du Maurier, cartoonist grandfather of Daphne, deemed her one of the three most beautiful women he had ever seen.

Yet there was far more to Florence than beauty alone. Perhaps it was her reputation for being witty and talkative that appealed to Oscar. The often acerbic author Horace Wyndham described her as “a charming woman and brim full of Irish wit and impulsiveness”, while The Era noted her “intellectual features” and “intelligence”. Her niece Dr Eleanor Knott, a renowned early Irish scholar and academic, remembered her as “a wonderful letter-writer…always crisp & gay – often sardonic; never dull”.

In the months that followed their first date, the affection between Florence and Oscar deepened. On Christmas Morning 1876, six months into their relationship, he gave her a delicate gold cross with his name engraved on it, an act often interpreted as a prelude to an engagement. As Oscar was an undergraduate at Oxford University the lovers saw little of each other, and his ardour appeared to wane over time. Florence, stranded in Dublin, became worried for her future. As a beautiful young woman of slender means and little education, her best hope of security at that time was to marry well, and she had attracted the attention of another brilliant young Dubliner.

Bram Stoker was a clerk in the Registrar of Petty Sessions in Dublin Castle, but his abiding passion was for the theatre. In December 1878, he took on the role of Acting Manager at the Lyceum Theatre in London. His new boss, celebrated actor Henry Irving, was, in Bram’s words: “mightily surprised when he found that I had a wife – the wife – with me”. Poor Oscar was devastated. He asked Florence to return the little gold cross he had given her, and undertook to carry it with him as a memento of “two sweet years – the sweetest of all the years of my youth”. Yet, he overcame his pique and they developed a friendship that lasted for years.

Florence and Bram enjoyed a successful marriage and a strong working partnership. During one of their frequent holidays, a Mrs Cruickshank, proprietor of the Kilmarnock Arms, said of them: “He was one of the nicest men I ever knew … A big, cheery, handsome Irishman; and his wife was the most beautiful woman I ever set eyes on”. When Bram’s health failed towards the end of his life, Florence nursed him tirelessly: “It is harder on poor Florence (who has been an angel) than on me”, he told his brother Thornley. “She had to do all the bookkeeping and find the money to live on – God only knows how she managed”.

Florence was tenacious in the protection of Bram’s literary legacy and devoted the last two decades of her long life to the astute management of her financial affairs, demonstrating a steely determination coupled with excellent business acumen. She was resolute in asserting her rights to Dracula, her chief source of income. When she discovered, by way of an anonymous letter, that Prana Films, a German company was showing Nosferatu, an unauthorised version of Dracula, she acted immediately.

Lacking resources, Florence joined the Society of Authors and, through this organisation demanded and was granted, after a torturous three-year battle, £5,000 in royalties along with an undertaking that every copy of Nosferatu would be destroyed. In October 1928, when she read an article in Today’s Cinema claiming, inaccurately, that Universal Studios had bought the rights, she took the fight to Hollywood and prevented the studios from profiting at her expense. The resolute and remarkably beautiful Florence Balcombe outlived her husband by 25 years and died on 25 May 1937 at the age of 78.

Wilde’s Women by Eleanor Fitzsimons will be published by Duckworth Overlook in October 2015.