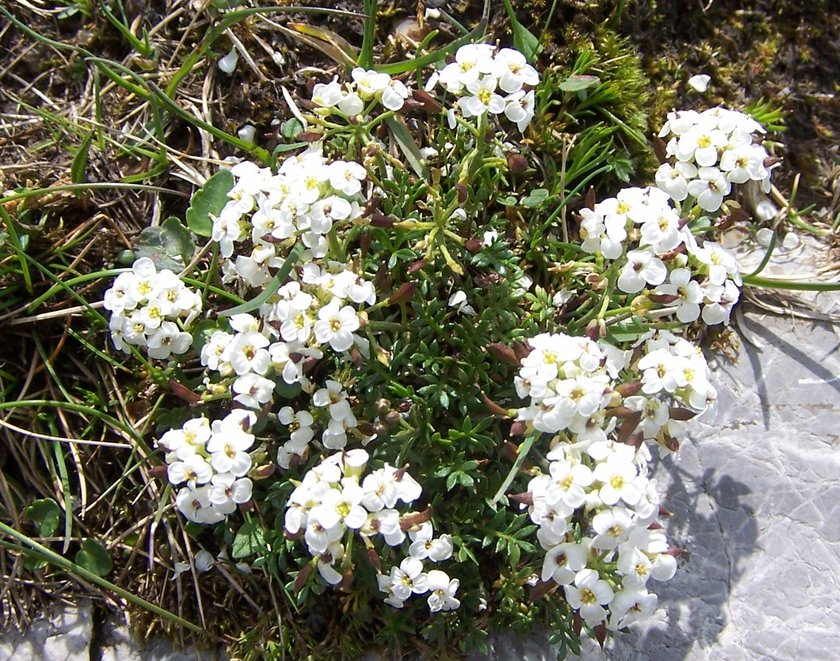 Ellen Hutchins' short life was marred by illness and family problems, making her achievements in the natural sciences all the more considerable. Despite ill health and the constraints imposed on her due to her gender, her passion for collecting, her meticulous attention to detail and her perseverance have staked out her eminent position in Irish botany.

By the age of 25 Ellen had established her reputation in Ireland and Britain, through her correspondence with renowned botanists such as Britain’s leading specialist in seaweeds at the time, and the curator of the Botanic Gardens at Trinity College Dublin. To form some idea of her importance in Irish botany we have only to consult the volumes of work produced by the most esteemed botanists of her day. Works such as James Townsend Mackay’s seminal Flora Hibernica (1836) contain many rare species recorded by Ellen. She never published her own findings as it would have been considered immodest. As was the tradition in the early 1800s, her discoveries were published by other botanists who described plants found by collectors. At first, she would not even allow her name to be known, but soon relented, and later agreed to have species named after her. Various species of lichens and non-flowering plants such as mosses and liverworts are named for her as Hutchinsiae.

Ellen was born at Ballylickey House, Bantry, Co. Cork, one of the six surviving children of Thomas and Elinor Huchins. Her father was a protestant tenant of a catholic landowner, Lord Kenmare. Thomas actively opposed the Penal Laws. In one instance he got into trouble for insisting that a local catholic priest be given a fair price for a fine horse. Thomas also courted trouble with the authorities through his illegal smuggling activities. The bay of Bantry was notorious as a prime port for illegal importation. Thomas chose to smuggle in French wine as he had travelled to France and spoke French well. Along with this illegal trade, his successful fishing trade made for a comfortable home and helped fund his children’s education after his death, when Ellen was a toddler. His sons attended Trinity College Dublin and his two surviving daughters also received an education.

As Ellen was a sickly child it was decided that she be sent to live with Dr William Stokes and his family at Harcourt Street, Dublin. Dr Stokes was Professor of Medicine at the Royal College of Surgeons from 1800 and he had a keen interest in botany, founding the Botanic Gardens at Trinity in 1806 (he modelled these gardens on the ones at Edinburgh, where he had studied medicine). His library at home contained works on botany and Ellen took heartily to the perusal of these volumes. Dr Stokes wholly encouraged her pursuits in botany from the earliest days, as it combined healthy outdoor activity with studious exercise of the mind. It was through Dr Stokes that Ellen met the next of her mentors, James Townsend Mackay, the first curator of Trinity’s Botanic Garden (a three acre site at Ballsbridge at the time – today it is located beside Trinity Halls, Dartry). His encouragement in early letters to Ellen displays a confident belief in her talents:

‘You are getting along famously in this branch. I am proud of having set you to work in it, being persuaded that for your discriminating powers and great attention you will in time make some important discoveries in this branch of natural history.’

Ellen’s particular branch was in cryptogamic botany, the study of non-flowering plants (the term ‘cryptogam’ does indeed come from the same root as ‘cryptic’). These algae, mosses, liverworts and seaweeds to which Ellen devoted her keenest attentions, were vastly understudied compared to the more easily observed flowering plants. In addition, Ellen was collecting specimens in the Bantry Bay environs, an area containing an interesting dispersal of rare flora. The combination of very good eyesight and great artistic talent meant that she could render the fine detail of species in exquisite detail. She also prepared dried herbarium specimens, a crucial duty of any serious botanist, which she annotated in detail.

By the age of 20, Ellen had contributed significantly to Dawson Turner’s Muscologiae Hibernicae, (1804), the first book devoted entirely to the mosses of Ireland. Turner (1775-1858) was an English banker, botanist and antiquarian. Ellen’s correspondence with Turner was opened up when Mackay disclosed her identity having sent him some of her samples of rare algae. Turner became another mentor for Ellen, sending her books and specimens to help guide her through the complicated process of identifying cryptogamic plants. Ellen did not wish to have her name as a collector in print but was quickly perceived to be a highly valuable contributor to established naturalists' work. Indeed Sir William Jackson Hooker (1785-1865), later Director of Kew Gardens, confided to Scottish botanist and palaeo-botanist Robert Brown (1773-1858) that ‘Miss Hutchins is a mine, but I never intend to bore her lest she should become too prolific’.

Nevertheless, Miss Hutchins was prodigiously prolific throughout the tragic and traumatic occurrences of her later life. By 1805 she had been recalled from Dublin. As the sole surviving daughter of Elinor Hutchins, Ellen was bound to return to live in Ballylickey House to care for her ailing mother and her brother Thomas, who was paralysed. Having left behind the society of Dublin, she made the best of her situation over the next few years. Her field work was done in the Bantry environs in her early twenties. Between 1809 and 1811, she identified and listed (in Latin) around 1100 plants around Bantry Bay. Her distant cousin and friend Thomas Taylor most likely got her on to collecting shells and she began studying molluscs. There has been speculation that there was a romance between Taylor and Ellen as they were of the same age and shared a great passion for botany and collecting.

A great upset occurred in 1813, when Ellen’s oldest brother Emanuel took possession of Ballylickey House, driving out his own mother and Ellen. Both were in poor health. They were forced to move and settled at Bandon, some thirty miles from Ballylickey, until Ellen’s mother passed away in March 1814. Ellen travelled the arduous roads back to Ballylickey to live with her brother Arthur, at Ardnagashel, which now contains the Ellen Hutchins Arboretum. In 1814, Taylor wrote of Ellen’s decline in health to Turner, whose ongoing correspondence with Ellen was of great solace to her in her isolation. She was consumptive and taking mercury for a liver complaint – the effects of which had reduced the young woman to ‘a mere skeleton’. The familial situation of Ellen in the years leading up to her untimely demise no doubt contributed to her mental and physical suffering. Unfortunately, illness and emotional upheaval took its toll on the fragile young woman and Ellen passed away on the 9th February 1815, shortly before her 30th birthday. She was buried in an unmarked site outside the south wall of Garryvurcha Church, Bantry. Her invalid brother Thomas passed away a few months later. Her sister in law, Matilda, Arthur’s wife, wrote of her passing to a greatly saddened Turner but the news took over a year to reach him due to the continuing family dispute. The fight between Emanuel and Arthur Hutchins culminated in forty armed men storming Ballylickey House. Emanuel was to expire in 1839 at the age of seventy in Damascus, ‘in mysterious circumstances’ while on a trip to buy Arabian horses.

Ellen bequeathed her collection to her greatest mentor and friend, Dawson Turner. Her collection was later passed along to Turner’s son-in-law, Sir William Hooker. Today, most of her herbarium specimens are held in the Natural History Museum, London (these can be seen online) and over 200 drawings are in the archives at Kew Gardens. Some of the duplicates of drawings of seaweeds by Ellen were passed from Hooker to William Henry Harvey, Professor of Botany at the Botanic Gardens and at TCD, who in turn passed on the drawings to Margaret Gatty (1809-1873), an English algae specialist. After Margaret Gatty’s death, Ellen’s drawings were given by Gatty’s daughter to Sheffield Museum. A fragment of Ellen’s vast collection remained in Ireland as it was bequeathed to Taylor, and forms the algae section of the Herbarium at University College Cork. Specimens have also been uncovered in the Herbarium of the Botany Department of Trinity College Dublin, Her shell collection was also donated to Taylor (including perhaps examples of the eight mollusc species she was first to record the presence of in Ireland) but this collection has been lost. Taylor donated it to the Royal Dublin Society in 1814 and its whereabouts are unknown.

William Henry Harvey, who was greatly influenced by the work of Ellen Hutchins years after her death, wrote in 1847 of her lasting effect on Irish botany in his work Phycologiae Brittanica:

‘[Her] name is held in grateful remembrance by botanists in all parts of the world. To her the botany of Ireland is under many obligations, particularly the cryptogamic branch, in which field until her time little explored. She was particularly fortunate in detecting new and beautiful objects, several of which remain the rarest species to the present day.’

Although she did not publish her own work and did not travel widely, Ellen Hutchins employed herself industriously in her context in time and place and made an indelible mark on Irish botany. She is a prime example of a pioneering female scientist who managed to surmount considerable obstacles due to the quality and calibre of her life’s pursuits.

Harvey, William Henry, Phycologia Britannica, or, A history of British sea-weeds : containing coloured figures, generic and specific characters, synonyms, and descriptions of all the species of algae inhabiting the shores of the British Islands,