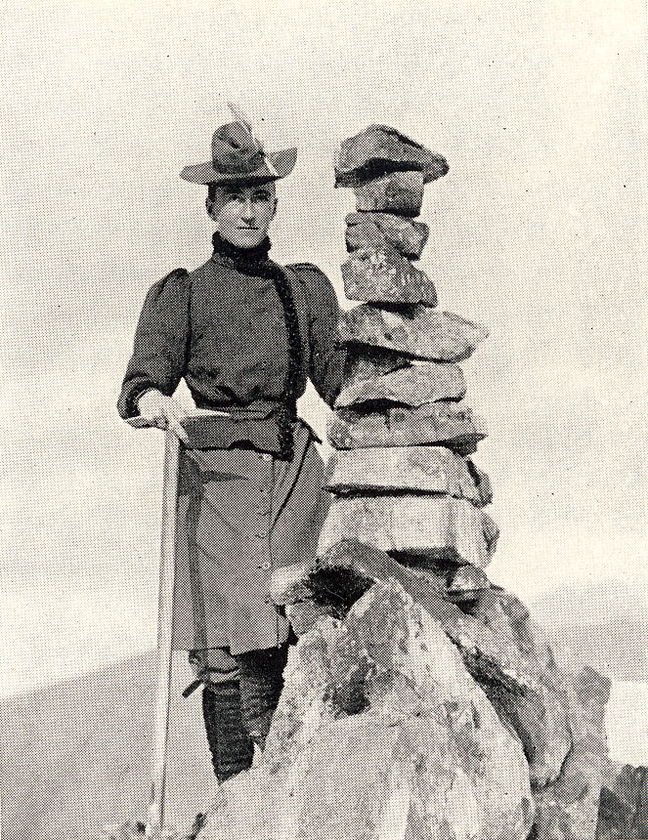 The date is 16 February 1896, and high on Monte Disgrazia, on the Italian-Swiss border, a climber and her two guides are caught in a raging storm. Choosing to continue rather than abandon their expedition, they make their way up the sheer face of the mountain until at length the summit is in reach.

We now paused a moment to pull ourselves together for the final struggle. Hats were tied down, goggles discarded, the rope somewhat shortened; and grasping our axes and taking a deep breath, we stepped round the comer and … into the full force of the shrieking hurricane … Conversation was impossible. We could only advance one by one, clinging on to the nearest projection, and haul at the rope for the next member of the party to advance. At last Schocher flung his arm round my waist and seized the rope at my back, giving it a vigorous tug. By this I gathered that … we were at that moment on the very summit of the Disgrazia! … In truth, it was the cairn marking the top, and a right welcome sight, for it told us that we might now with clear consciences go down again.

The climber was Lizzie Le Blond, formerly Elizabeth Hawkins-Whitshed of Killincarrick, Co Wicklow. Born in 1860 in Dublin, at eleven Lizzie inherited the family estate, and at eighteen married the celebrated adventurer and best-selling author, Captain Fred Burnaby. Within less than two years the couple were living apart, Lizzie moving from one European resort to another in search of a cure for the lung trouble which allegedly plagued her. In the summer of 1881 she arrived at the still-undeveloped mountain village of Chamonix, and saw ‘for the first time those glacier-clad Alpine ranges which were to mean so much to me for the rest of my life.’ Two weeks later she made her first significant ‘scramble’ when she and a woman friend, clad ‘in high-heeled buttoned boots and shady hats’, spontaneously decided to climb as far as the Grands Mulets, about two-thirds of the way up Mont Blanc. The expedition whetted Lizzie’s taste for adventure. During the following summer she scaled Mont Blanc twice, and over the next two decades spent much of her time in Switzerland, climbing in both winter and summer and making more than one hundred ascents.

Later in her climbing career, she abandoned Switzerland for the Norwegian Arctic, and over six summers there notched up a total of thirty-three climbs, twenty-seven of them first ascents. She also defied tradition by occasionally climbing without a guide, and was described as being ‘among the very earliest (probably … the first) to attempt “manless” climbing’, although this was regarded as too shocking at the time to be officially recorded.

As an alpinist, Lizzie was innovative in choosing to specialise in winter climbing, claiming several first ascents and popularising the activity in the process. Secondly, she demonstrated women’s ability to participate in the sport on the same terms as men. Lizzie was not the first woman to climb in the Alps, and the two previous decades had seen the first female ascents of a number of its highest peaks. But when she began climbing in the 1880s, women were still very much in a minority, and had to contend both with the misogynistic views of many of their male colleagues and with current perceptions of female capabilities and appropriate behaviour.

According to Lizzie, writing in 1932:

The chief reason why women so seldom climbed fifty years ago was that unless they had the companionship of a father, brother, or sister, it was looked at as most shocking for a ‘female’ to sleep at a hut or a bivouac.

Never till her first climb, she marvelled:

Had I put on my own boots, and I was none too sure on which foot should go which boot. It is difficult for me to realize now that for several years longer it did not occur to me that I could do without a maid … I owe a supreme debt of gratitude to the mountains for knocking from me the shackles of conventionality, but I had to struggle hard for my freedom. My mother faced the music on my behalf when my grand-aunt, Lady Bentinck, sent out a frantic S.O.S. “Stop her climbing mountains! She is scandalizing all London and looks like a Red Indian.”

In 1883 Lizzie published The high Alps in winter, or mountaineering in search of health, the first in a stream of books and articles describing her climbing experiences. But it is her photographs which offer the most vivid account of her career. Almost from the beginning, she carried her camera with her while climbing, and was among the first to photograph the mountains at close quarters. Years later she reflected on her early, largely self-taught, efforts, and the difficulties involved in what was still a very novel activity:

When I got my first camera, a very cumbersome concern … on a stand … I had to learn everything as best I could. The Chamonix photographer gave me hints, and his advice as to developing was “develop till the plate is as black as a mortal sin!” It was trying work setting up a camera with half-frozen hands, hiding one’s head under a focusing cloth which kept blowing away, and adjusting innumerable screws in a temperature well below freezing-point. But one learnt one’s job very thoroughly and I confess that even now I never feel satisfied unless I have done all the developing, printing, etc., of an exposure … myself.

Many of Lizzie’s photographs were included in her own and others’ publications, while others were used to illustrate her lantern lectures, including one entitled ‘Mountaineering from a woman’s point of view’. She also became involved at an early stage in film-making: a 1902 catalogue lists ten of her short films, all set in Switzerland, featuring bob-sleigh racing, tobogganing and figure skating, making her the world’s first mountain filmmaker as well as one of the first female filmmakers.

In 1885 Fred Burnaby was killed in battle in the Sudan. Lizzie’s second marriage, to mathematician John Frederic Main, was also short-lived. Main emigrated to the US, where he died in 1892, and in 1900 Lizzie married Aubrey Le Blond. Initially at any rate, this marriage appears to have been successful, and lasted until her death more than thirty years later.

By the early 1900s Lizzie had more or less retired from climbing, but she remained one of the sport’s best-known spokeswomen, and in 1907 helped to establish and was elected first President of the Ladies’ Alpine Club, the first climbing association for women in the world. She also turned her hand to travel writing and to family history, most notably a two-volume translation of the letters of her great-great-great-grandmother, Charlotte Sophie, Countess Bentinck, and travelled widely, both in Europe and beyond.

In 1912 she and Aubrey toured China, Korea and Japan, returning via Russia, where Lizzie described Moscow and St Petersburg in the last days of Tsarist power. When war broke out in 1914 she promptly enrolled for war work, at first as a nurse in a French Red Cross Hospital and from 1916 as director of the fundraising section of the British Ambulance Committee. A few months after the Armistice, she set out to visit the French battle grounds. Travelling through an area devastated by four years’ of war, she was profoundly affected by what she saw, and devoted much of the 1920s to efforts to promote Anglo-French friendship. She continued to travel widely, published her memoirs and maintained her involvement in the affairs of the Ladies’ Alpine Club, of which she was re-elected president in 1933. Active almost to the last, she died on 27 July 1934, and was buried in Brompton cemetery in London.

Throughout her life, as Lizzie herself admitted, she had been fortunate ‘in meeting interesting people, visiting interesting places, [and] taking part in interesting events.’ But in fact, as this summary shows, she herself was much more an actor than a spectator. Her photographs are recognised both for their aesthetic merit, and as a source of evidence on early winter sports activity, on tourism in the Alps and on environmental change. But it is as an alpinist that she will be best remembered. Qualities noted by her contemporaries included her physical courage and sure judgment, ‘never surpassed’ (according to the Journal of the all-male Alpine Club) ‘in any mountaineer, professional or amateur, of the so-called stronger sex.’ To her involvement with the LAC she brought an aptitude for business as well as a talent for friendship and an appreciation of others’ achievements, while her own career, as ‘one of a small group of adventurous spirits’, who defied ‘the criticisms heaped upon them for indulging in so “unwomanly” a sport’ stood as inspiration to the women climbers of a later and less confined generation.

Rosemary Raughter, ‘Mountaineering from a woman’s point of view: Lizzie Le Blond and the early days of the Ladies’ Alpine Club’, Journal of the Irish Mountaineering and Exploration Historical Society, volume 4 (forthcoming)