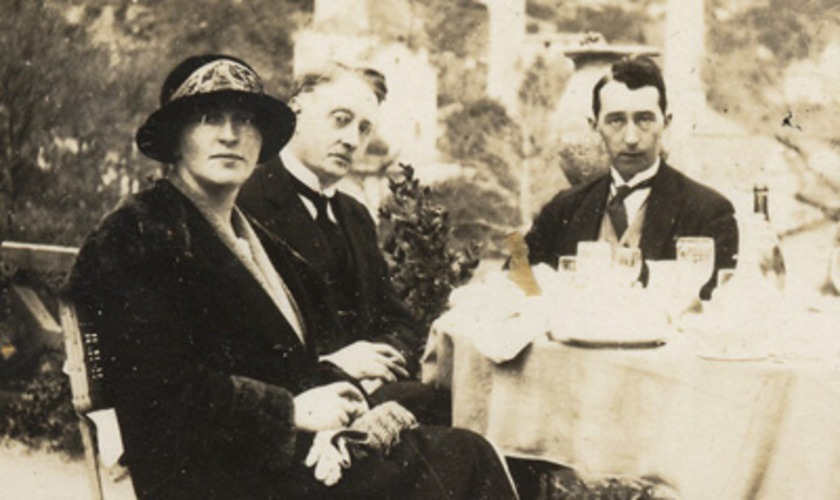 Brigid Lyons-Thornton, W.T. Cosgrave and another in Nice, 1925 / The McGuinness Collection

The story of Dr. Brigid Lyons Thornton’s life and work is played out in Dr. John Cowell’s book, A Noontide Blazing. Dr. Cowell’s book gives an insight into how important women were in shaping the Irish Republic. They are the ‘unsung’ heroes of the Irish struggle for independence, on both sides of the border. Dr. Brigid Lyons Thornton (1896-1987) was one of these extraordinary women.

Brigid Lyons (later to add Thornton to her name when she married in the 1920s) was born into a prominent Roscommon nationalist family in 1896. Brigid’s academic talent was evident from an early age. In particular she flourished in Irish, winning prizes for being the best Irish speaker in her school. However Brigid’s father would have been unable to send her to secondary education because he was a poor farmer, so her uncle Frank Mc Guinness and his wife Kate, took Brigid to live with them in Longford and paid for her education. Frank McGuinness is credited for sparking Brigid’s interest in Irish history and politics.

In Longford, Brigid flourished at the local convent school under her French teacher, ‘Madam Scholastica’ (Beatrice Dolan) who saw it as her duty to inform these bright minds of their role in a possible ‘new’ country i.e. an Irish Republic. Madam Scholastica also encouraged her pupils in their future careers, saying that “there was nothing in life a woman could not do if she put her mind to it.”
This was a great encouragement to Brigid as she had long entertained the idea of becoming a doctor. However, her family was set against it on the grounds of cost and the fact that she was a woman. Brigid set out to prove them wrong. She won a county scholarship to study medicine in University College Galway in October 1915.

In the summer of 1915, Brigid was staying with an aunt and uncle in Dublin when she joined the ‘Cumann na mBan’, of which her aunt was a prominent officer. Brigid learned first aid and when a prominent nationalist Jeremiah O'Donovan Rossa died in New York, she was picked to head the Cumann na mBan section of his funeral parade when he was buried in Dublin.

Brigid settled into her new life as a medical student at University College Galway and began to get involved in more serious nationalist activities; aiding the escape of prisoners, handing over guns and organising a Cumann na mBan branch in Galway. All this would be in preparation for her role in the Easter Rising in 1916. Brigid was at home in Longford in Easter of 1916 when word spread that many members of the Irish Volunteer Force had taken over strategic buildings in Dublin with the British Army returning fire and that an uprising was taking place. Along with her Uncle and a few others she headed to Dublin to see how she could be of service.

After arriving in Dublin, Brigid was ushered to the Four Courts, where some of the fiercest fighting took place. Due to her medical training and background, Brigid was given the task of nursing the wounded and also serving up provisions to the exhausted fighters. As Brigid was brave and courageous throughout her involvement in the Easter Rising, she was the recipient of gold sovereigns that she stitched into her dress in case of arrest.

When Padraig Pearse surrendered to the British army on the 29th of April, Brigid and some fellow nurses were arrested and taken to Richmond Barracks (later Keogh Barracks). The nurses were under arrest for several days, during which time some of the leaders of the Easter rising were found guilty and shot. Eventually Brigid was released. However she was a changed woman. She knew now that only a government in Dublin, ruled by and for the people, would be the answer to Ireland’s problems.

In the following years of Home Rule and WW1, Brigid became more and more involved with the nationalist movement; smuggling money, gold and guns to fund the ‘cause’. She and her fellow Cumann na mBan women kept “morale high…. With parcels, protests and letters.” Brigid was one of the most active Cumann na mBan women, from sending parcels to writing to prisoners. She did this while also continuing her studies.

After the establishment of an Irish Republic finally came in 1922, Brigid became the only female to ever be commissioned as an officer in the new Irish Army. She later went on to become a leading figure in the fight against tuberculosis amongst the poor in Ireland, carrying out research in Nice and Switzerland, and pioneering the ‘BCG’ vaccination scheme in the 1950s, practically ridding Ireland of tuberculosis. Brigid’s role in these diverse, traditionally male-dominated fields certainly was extraordinary, even daring, for a time when women were to be seen and not heard.

Photograph courtesy of the McGuinness collection.